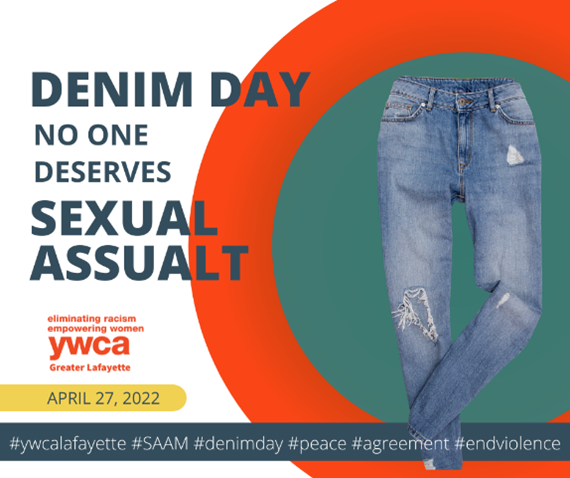 When you wear denim on April 27, you make a fashion statement and a visual statement that you support survivors of sexual assault. Denim Day was established in 1999 by Peace Over Violence after a ruling by the Italian Supreme Court overturned a rape conviction because of the clothing the victim was wearing, tight denim jeans. It has been coined the “jean alibi.” A young 18-year-old woman was raped by her 45-year-old driving instructor. He was arrested prosecuted, convicted, and jailed for rape. However, during an appeal, he claimed the sex was consensual because her jeans were so tight, she had to help him remove them. Therefore, sex could not have been forced and not rape. The conviction was overturned. This left the women of the Italian Parliament stunned. In response to the new verdict, the women wore jean in solidarity to the victim. Find out more about the 1992 case.

The purpose of Denim Day is to remind us that sexual assault is never the victim’s fault, no clothing is an invitation to being raped.

No one deserves sexual assault.

You can make a difference and take action

Knowing that cases like these exists can begin the process of ending sexual violence for all. As community members we are responsible for raising awareness and educating others about the action steps that we can do to create safe places for survivors to come forward, ending rape culture, and building a consent culture. The following steps are some of the ways you can take action on Denim Day but there are so many more ways!

April is Sexual Assault Awareness Month and Denim Day is one day out of that month. However, sexual assault happens every day.

Every 68 seconds a sexual assault occurs in the United States.

We can make a difference by acting on what is in our power to do.

No act is too small or too big.

What will you do?

Send us your pictures and ideas on our Facebook page and Instagram-YWCA_Lafayette!